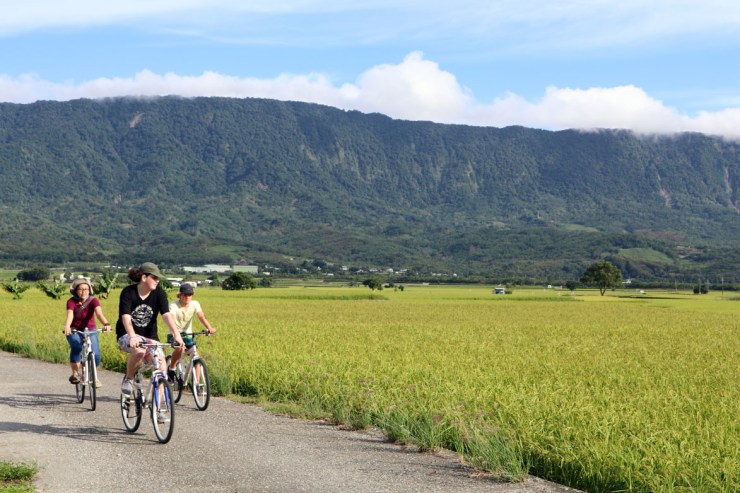 Taiwan’s major cities, the pop culture (and history) that comes with them, are all on the country’s west coast, but head east over the mountains, and you’ll find a dramatic landscape and a laid-back almost Californian culture you probably haven’t heard much about.

It’s only a few hours’ drive from the capital Taipei to the east coast, but it’s a different world. Steep mountains line the coast for as far as you can see, interrupted here and there by the occasional waterfall and, to your left, the glistening South China Sea.

It has to be up there with some of the world’s most scenic driving routes – the highway hugging the coastline, at times through tunnels and across a series of tall bridges that cross wide gorges and wild-looking rivers.

Heading south along this coastal highway, you’ll pass through several small towns, each promising a range of outdoors activities, from hiking, cycling, archery and white water rafting to surfing and scuba diving.

A good place to start your East Coast exploration is at the Lanyang Museum in Yilan, where you’ll learn about the region’s geological and anthropological history. The east coast of Taiwan has the country’s largest populations of indigenous peoples, or Taiwanese aborigines, and as you continue south, you’ll find a number of fantastic interpretive centres and learn more about these rather mysterious people, whose history dates back 5500 years before Han Chinese settlement.

The steep mountains that cover much of Taiwan are interspersed with hundreds of rivers, and the steep gradients mean that the rivers flow fast and often pass through numerous towering waterfalls and rapids on their way to the Pacific Ocean.

About halfway down the coast, in Hualien County is the best spot for white water rafting, down the wild-looking Xiuguluan River. At 104 km long, it’s the longest river in eastern Taiwan and near the coast, between Rui-sui and Da Gangkou, in the Xiuguluan River Canyon, there are over 20 sets of rapids which provide an exhilarating ride. The boats seat about eight people and one difference about rafting in Taiwan is that you are in the boats on your own, with no instructor.  Lifeguards drive around the river in small motorised boats to keep an eye on things, so while you’re in no danger, it makes it a lot more fun being in total control of the boat yourselves.

If cycling’s more your thing, a paved cycle path runs the entire length of the east coast of Taiwan, which attracts thousands of cyclists each year. If you’d rather just send a day (or a few hours) cycling, there are some great cycle paths winding through fields of rice, and plenty of bikes for hire, in Taitung, in an incredibly pretty valley, bright green rice fields with a backdrop of dark, rugged looking mountains that disappear into the clouds.

Not far from the southern tip of Taiwan is the county of Taitung, and this is the place to come to catch a wave. The coastline through Taitung’s townships of Changbin, Chenggong and Donghe is fringed with coral reefs that produce quality waves in terms of size and shape, with the best surf found between Donghe and Changbin, where the continental shelf extends 50-60 meters from shore and the gently sloping seabed makes stable waves.

Being fairly new to the surfing scene means the breaks in Taiwan are uncrowded, the locals in the line-up are mellow and the scene is very friendly for beginners.

In Taitung, sea temperatures hover around 25°C in winter, which means surfers can paddle out pre-dawn clad only in board shorts and a slick of factor 30+ sunscreen. While the line-up at Jinzuen Harbour is not as empty as it was before the country began hosting the WSL Taiwan Open of Surfing in 2011, it’s well and truly on the radar of surfers with a sense of adventure from around the world.

The Taiwan Open of Surfing has been held in nearby Jinzuen Harbour in November every year since 2011 and is now a World Surf League (WSL) Qualifying Series (QS) event.

The town of Jinzuen is where the Californian influence really kicks in. The whole town is like a Taiwanese version of Huntington Beach, only much smaller. There are surfing movies showing in the cafes, surfboards stacked against most walls, long-haired Taiwanese surfers lounging at the bar drinking Coronas and Tsing-Tao beers, with menus that are a California-Taiwanese fusion of burgers, tacos and giant bowls of ramen (Surfers’ Ramen Bowl).

Much like California, the islands are where you’ll find the best diving, a ferry-ride away from Taitung, at Green Island, famous for its fringing coral reefs and clear water.

The ferry crossing takes about 60 minutes, and, and rather like California’s Catalina Island, when you arrive, you’ll feel a bit like you’ve stepped back in time, to a sheltered bay, with a pretty little seaside village and turquoise water.

The bay, once fished out by local fishermen, is now a marine reserve, and a testament to nature’s ability to bounce back. Large coral bommies are surrounded by clouds of fish, and in the nooks and crannies you can search for nudibranchs and moray eels, while banded sea snakes wind in and out of the colourful sea fans, and a giant titan trigger fish snap at your heels.

And the water is incredibly clear, with visibility extending at least 40m (and we dived a few days after a typhoon had swept through).

At the nearby East Coast National Scenic Area Visitor Centre, you can experience an immersive session in Taiwanese aboriginal culture, with cultural performances, and plenty of activities for adventurous kids that include tree tops courses, archery, even how to fire a giant bamboo cannon. There are also several well-maintained hiking trails along the coast, great for exploring the dramatic-looking rock formations and tidal pools, one of the most scenic in Taitung taking you to Sanxiantai Islet across an eight-arch bridge.

So, choose your own adventure and experience a little bit of California on Taiwan’s East Coast.

China Airlines fly daily to Taipei from Brisbane and Sydney, with three flights per week ex-Melbourne.