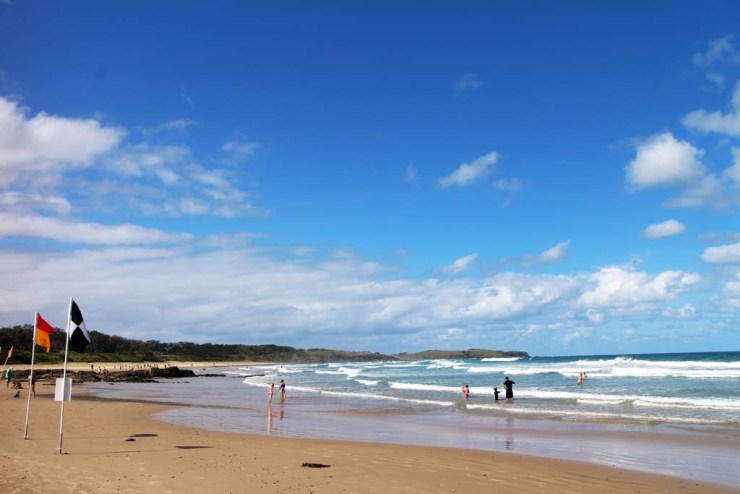 The Big Banana, perhaps for its kitsch value, is a good example, although these days, the chocolate-coated bananas aren’t quite so popular. In fact, these days, bananas don’t even take centre-stage any more, as the place is now promoted as an amusement park. 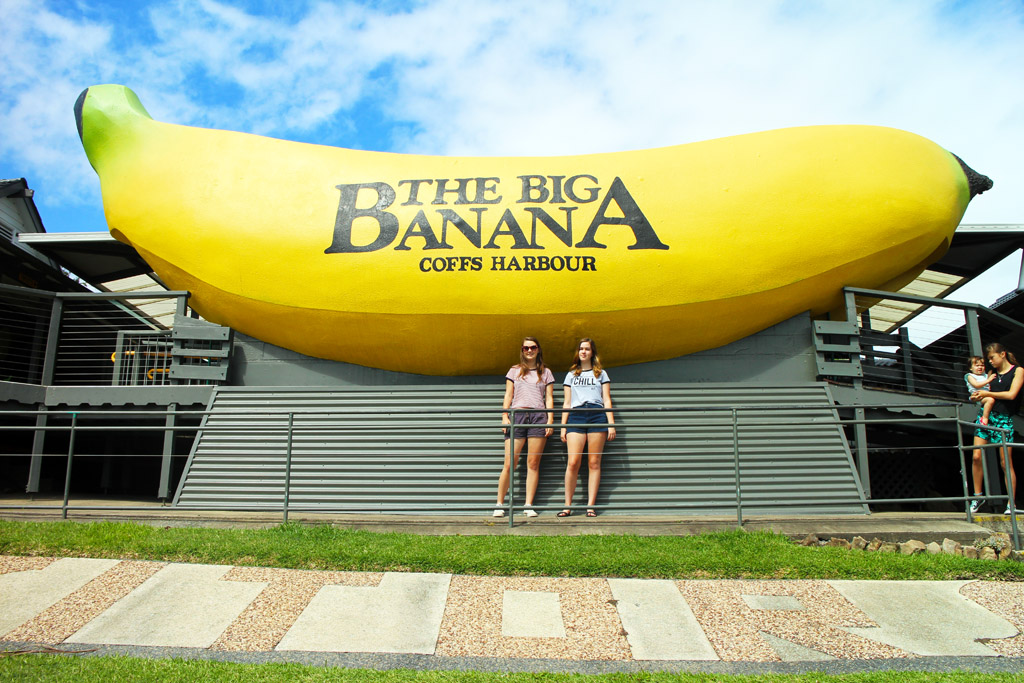 When I was a kid, and perhaps also when my eldest (now 20) was a toddler, the big attraction here was a ride through the banana plantations in a ‘train’ pulled along by a tractor. The ride climaxed as the train rounded a small dam, and a ridiculous-looking fibreglass bunyip rose out of the water to give us a scare.

Not sure what happened to the bunyip – hopefully sitting in a museum somewhere, but it’s now been replaced with ice-skating, lazer-tag, toboggan track, giant water slides and a lolly shop.

So while the Big Banana theme park held the teens attention for a few hours, there’s plenty more to do on the Coffs Coast. 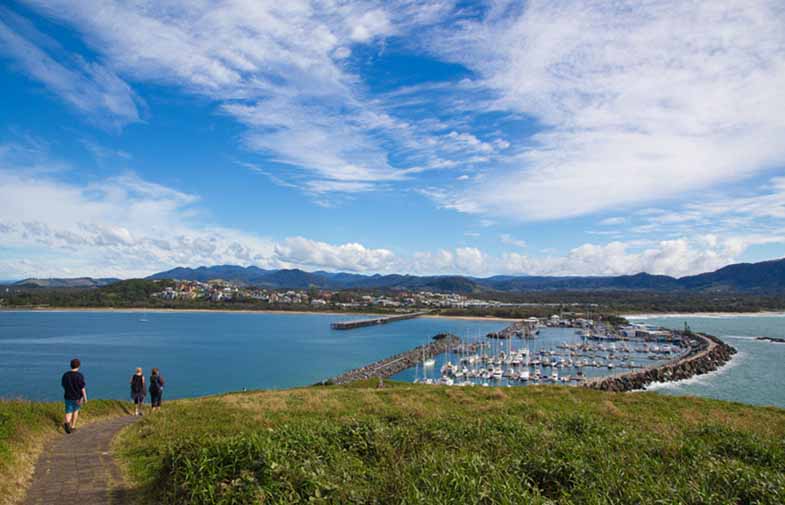 1. Muttonbird Island. Start the day with a walk over Muttonbird Island. In Spring, you’ll find hundreds of muttonbirds (also called shearwaters) nesting here, and the views are pretty spectacular year-round, up and down the coast and back over the harbour. 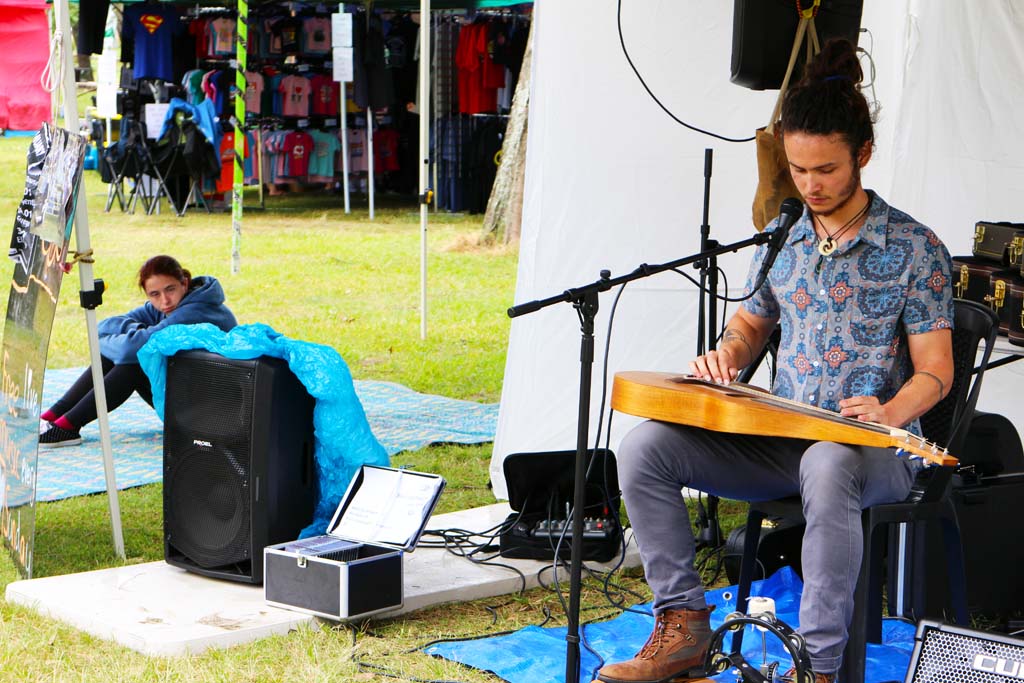 2. Harbourside Market. Held every Saturday, the Harbourside Market is a great place to hang out for some live entertainment, plenty of curiosities and a great range of international food stalls, everything from home-made sausage rolls and gourmet burgers to authentic Indian and Thai curries and fantastic Tokyo-style Japanese cuisine at Mamagoto. 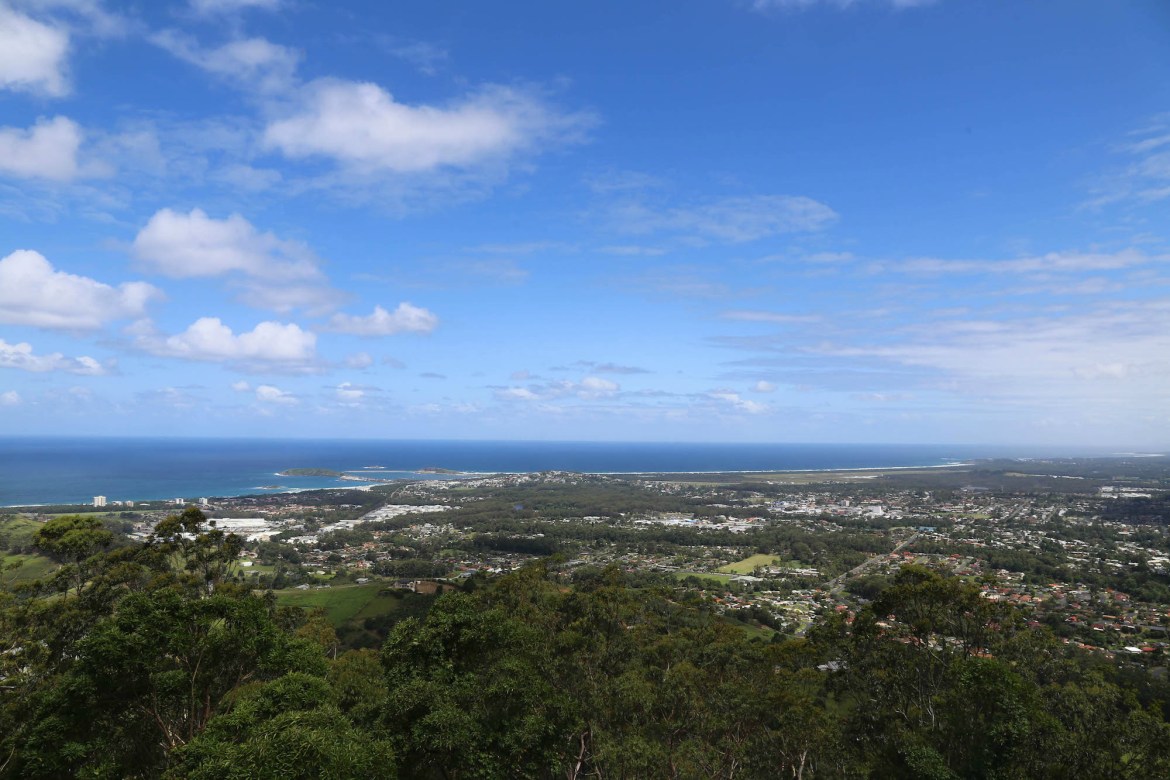 3. Sealy Lookout. Located on one of the highest points of the Coffs Coast in Bruxner Park, this lookout provides rather magnificent views (and selfie opportunities). You can see the entire city, and a fair stretch of coastline. 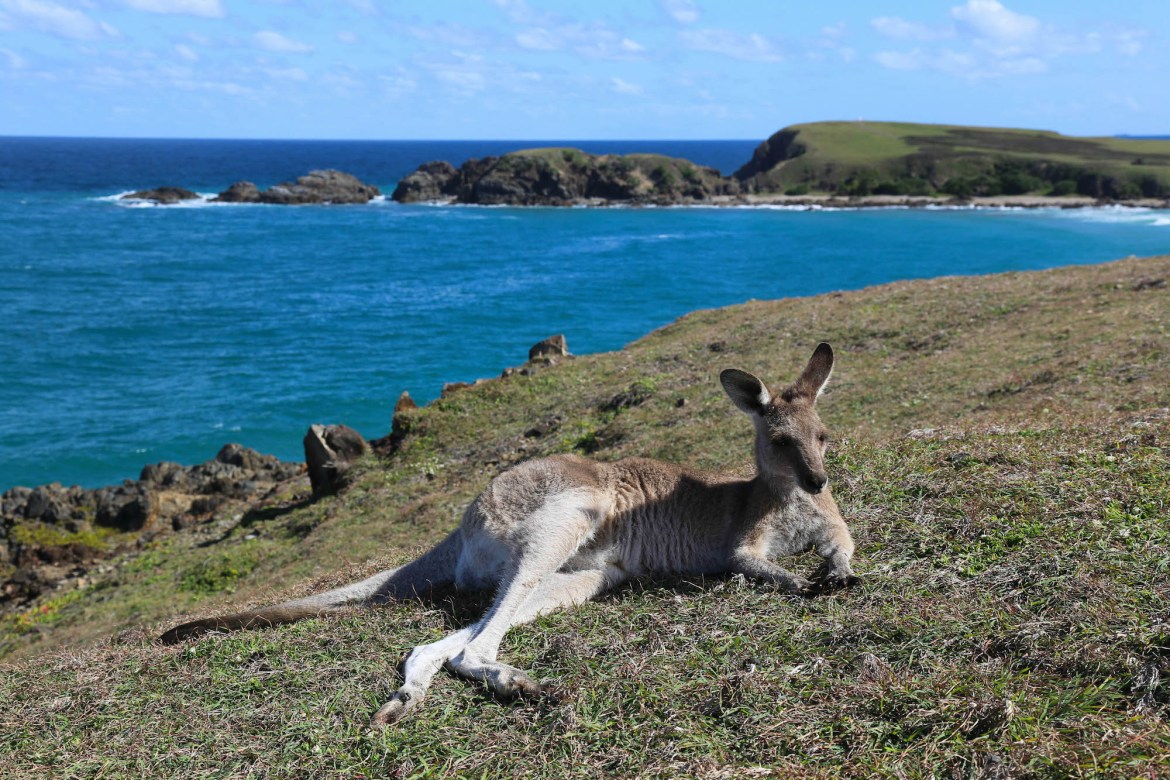 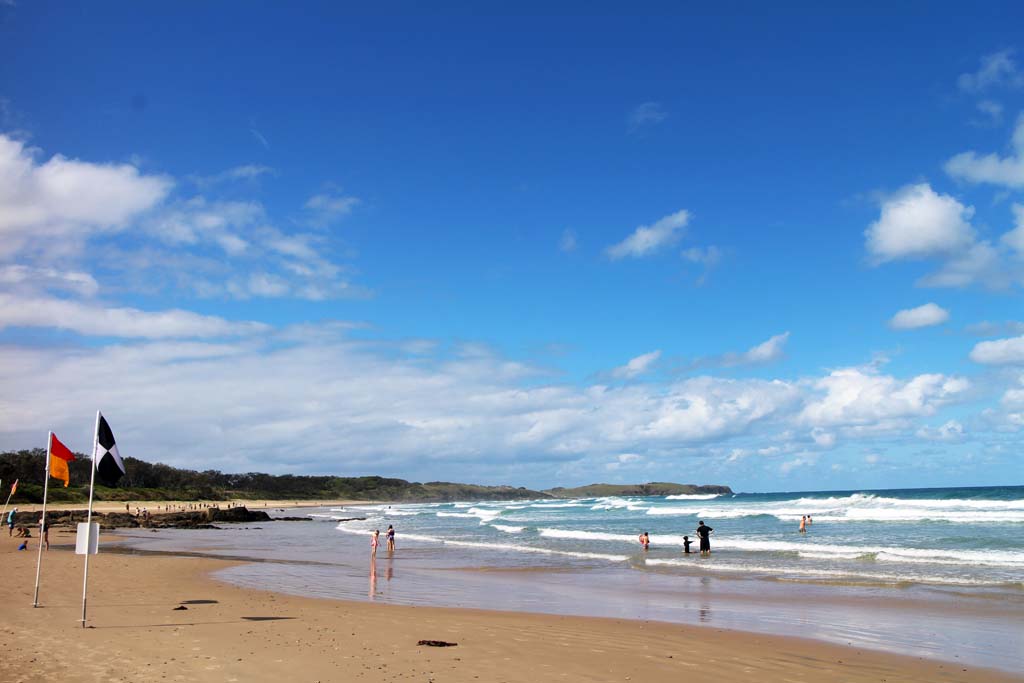 5. Surfing. It probably goes without saying that there are plenty of decent surf beaches along the Coffs Coast, and if you need lessons, there are few surf schools to choose from, including Solitary Islands Surf School – who offer daily lessons at Discovery Emerald Beach Holiday Park. 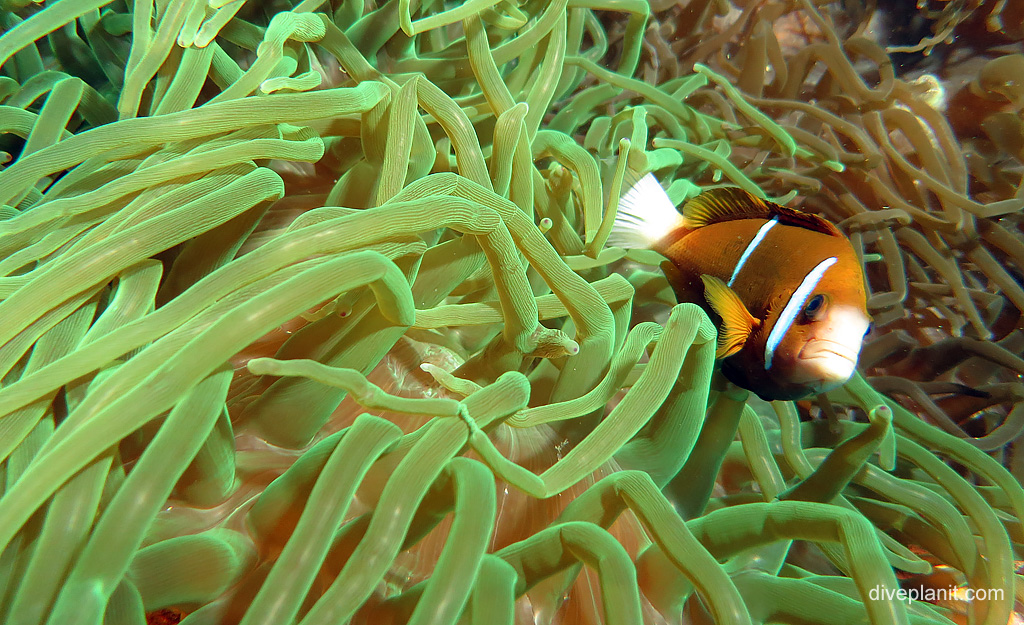 6. Snorkeling and Diving. Jetty Dive can take you out to the South Solitary Islands to explore sub-tropical waters, complete with pretty corals, and plenty of marine life. You’re almost guaranteed to spot turtles, grey nurse sharks and moray eels, and if you’re really lucky, manta rays. 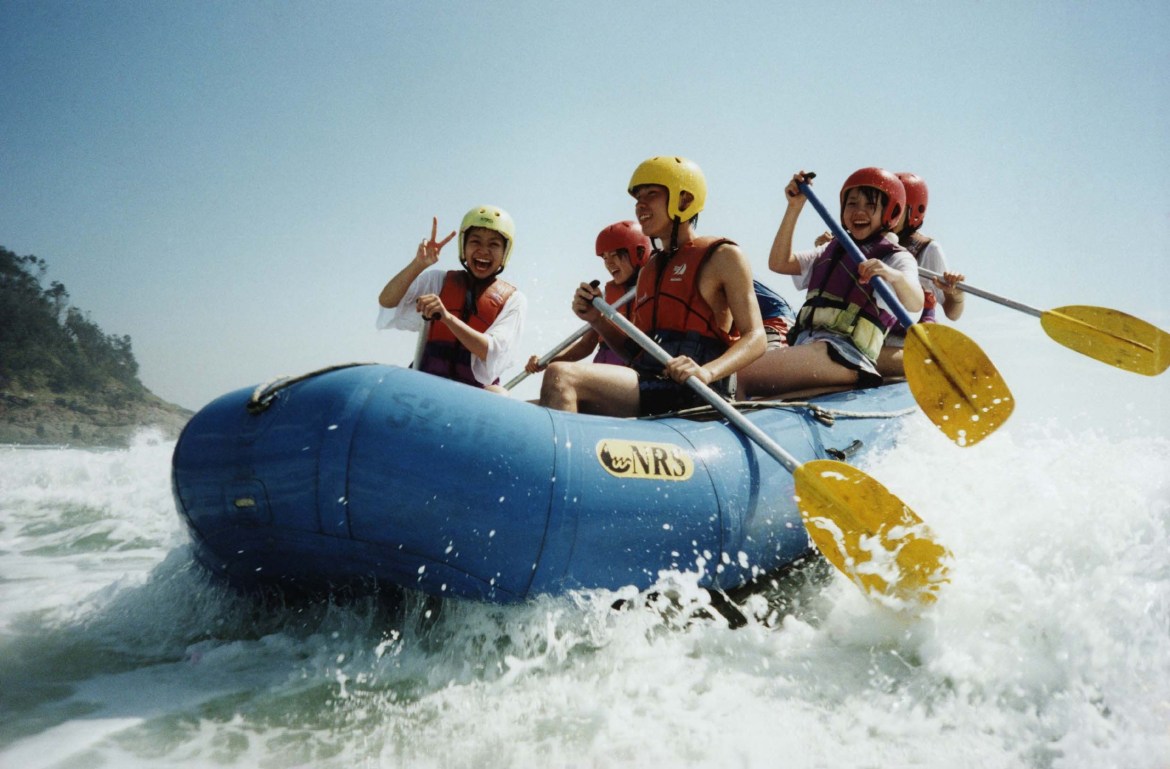 7. Surf Rafting and Sea Kayaking. Liquid Assets has been running surf rafting, kayaking and white water rafting tours for a number of years. Surf rafting is a bit like white water rafting, (except you catch waves instead of navigating rapids) and the sport was actually invented right here in Coffs.

8. Shopping. Because no holiday with teens is complete without wandering aimlessly around a shopping mall. Park Beach Plaza has all the usual suspects and in the city centre there is possibly the largest selection of thrift shops I‘ve ever encountered.

We were lucky enough to take a new Ford Everest on this trip which proved to be the perfect car for a road trip with teens. Plenty of room for tall gangly teenagers (and all their paraphernalia), several USB charge points for devices and Bluetooth sync available for several devices as well so everyone could share their music.

Emerald Beach Holiday Park, just north of Coffs Harbour, is a great choice for families with teens. A two-bedroom cabin sleeps the six people comfortably, and it’s a 30-second walk to a beautiful white sandy surf beach. The Solitary Islands Coastal Walk runs north and south of the beach, and on the southern headland you’ll be hard-pressed not to trip over all the kangaroos and wallabies sunning themselves on the grassy verge.

The park has free wifi, free movies each night, a rather awesome waterpark and giant bouncy pillow for younger kids, and for the older kids, a great little café serving up smoothies and freshly brewed caramel mocha cappuccinos.