It’s early morning and we’ve just climbed a steep hill behind the sprawling complex of the Shangri-La Rasa Ria, early enough in the day to have a clear view Mt Kinabalu, which appears above the morning mist in the distance. It’s one of several early morning starts for us during our stay at the gorgeous Shangri-La Rasa Ria, and every one has been worth the wake up call. This one especially as there is a champagne breakfast waiting for us at the summit, that someone else got up even earlier to prepare for us and lug up the hill in 100 per cent humidity. All I had to lug up the hill was myself. It’s a beautiful spread of fruit, cheese, cold meats, croissants, juice and champagne. I feel compelled to eat and drink as much as I can, partly because I MUST have burnt/sweated off a few thousand calories hiking up the hill and partly so these guys who don’t have to carry it all back down again. 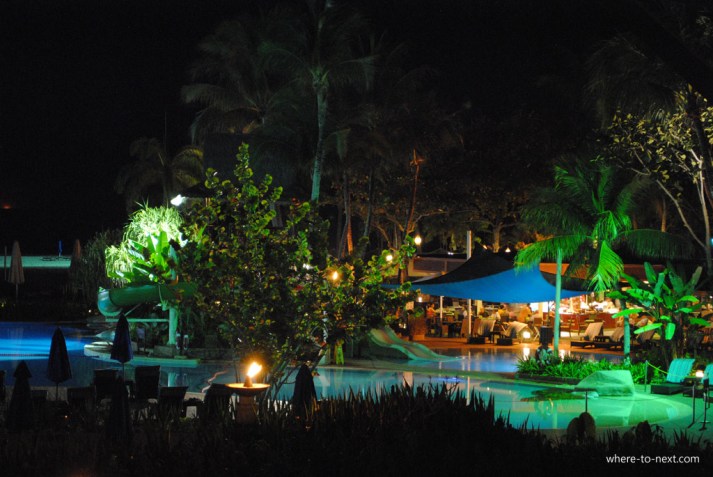 The Shangri-La Rasa Ria resort has the concept of ‘luxperience’ down to a tee. 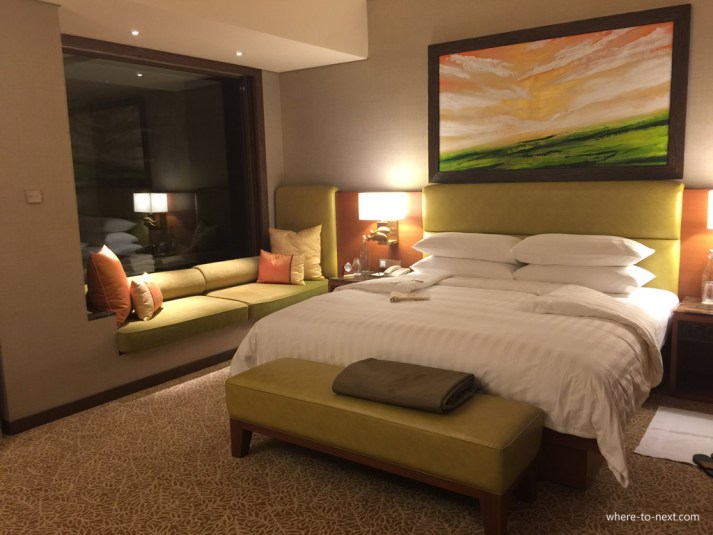 The rooms are without a doubt among the most luxurious hotel rooms I have ever stayed in and the setting is within a beautiful natural environment, which they make large efforts to conserve both with conservation projects and sustainable practices. 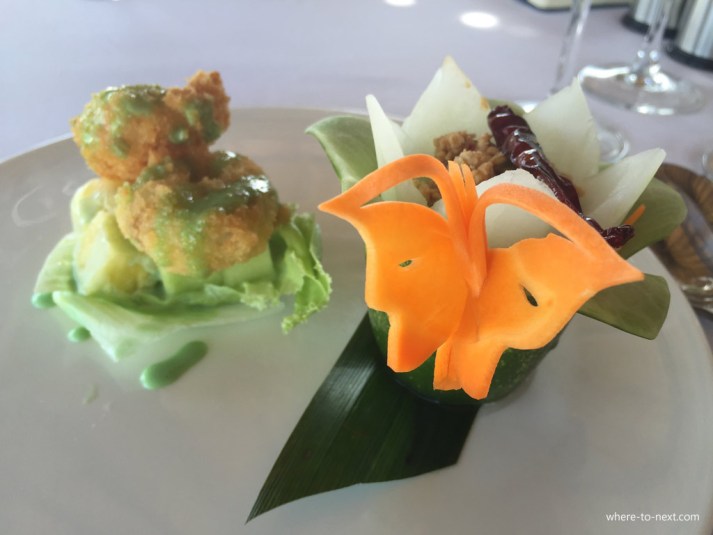 And did I mention the food? Wow. 5-star Japanese Teppanyaki, Indian and Italian restaurants, and a wonderful Malaysian hawker food market down by the beach for fresh seafood, satay, noodles and stir fry.

The range of activities on offer here is one of the widest I have ever come across. Everything from hiking, cycling, kayaking, sailing, jetskis, parasailing, archery, rock climbing, horse riding, cooking classes and (of course) spa treatments. There are two swimming pools, several restaurants and for the kids, there is a large water slide, a floating trampoline, playground and kids club. Not to mention croquet, tennis, giant chess, petanque, golf and a whole range of off-site tours. 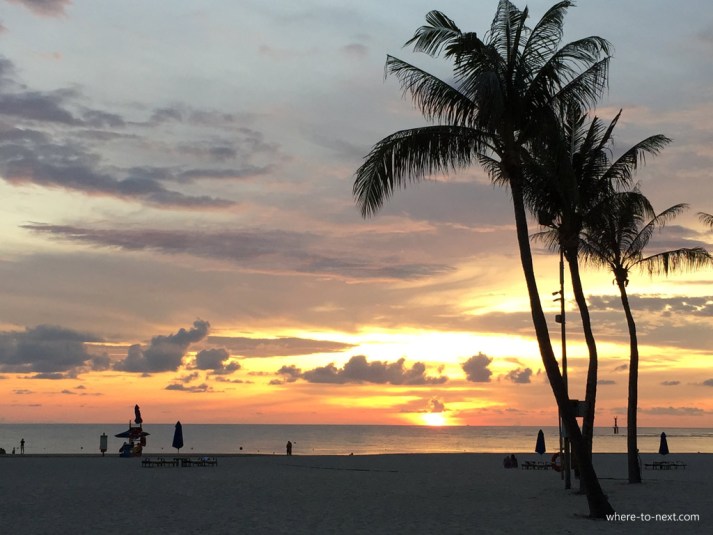 So each day we rise early and go exploring, each lunch we’re served something delicious at a different venue, and each evening we have a few drinks at the beach-side bar and watch the sunset, before being fed again. 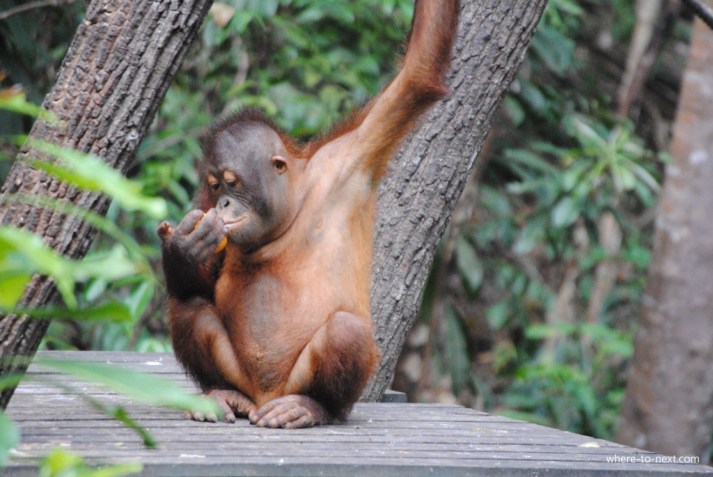 But what makes this place really special is its Orangutan Sanctuary, part of Shangri-La’s long term commitment to the conservation of this lovable, highly endangered creature – our closest primate relative. The sanctuary was opened in 1996 and works together with the Sepilok Orangutan sanctuary over in Sandakan and Sabah Wildlife, to help raise and rehabilitate orphaned orangutans, victims of the booming Palm Oil industry. 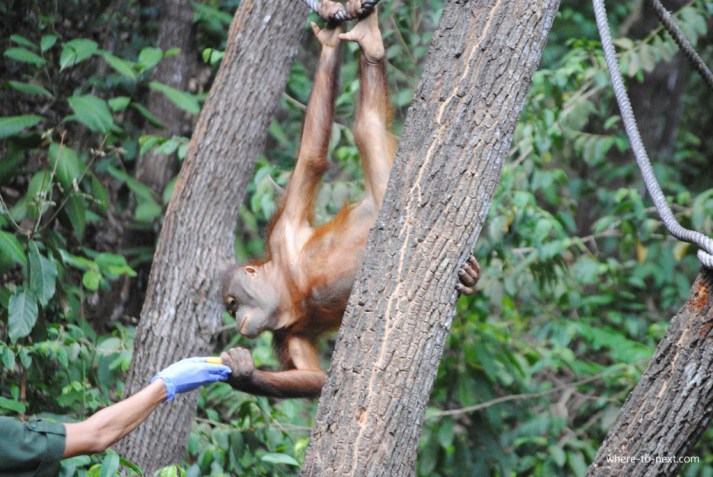 Babies are usually found by villagers, orphaned perhaps because their mothers have abandoned them in a panicked flee from encroaching plantation workers and handed over to authorities. They are examined by vets and treated for any illnesses and malnutrition before being handed over to the Sepilok Orangutan Sanctuary to be taken care of for the first few years of their lives. Orangutans are solitary creatures, and young are raised by their mothers for at least 7-8 years before they are able to take care of themselves. These orphans need to be taught the basics of orangutan life, like how to climb and forage for food. The rangers at the sanctuary take mum’s place in that role, and for cuddles, the young orangutans find another orphan to bond with. 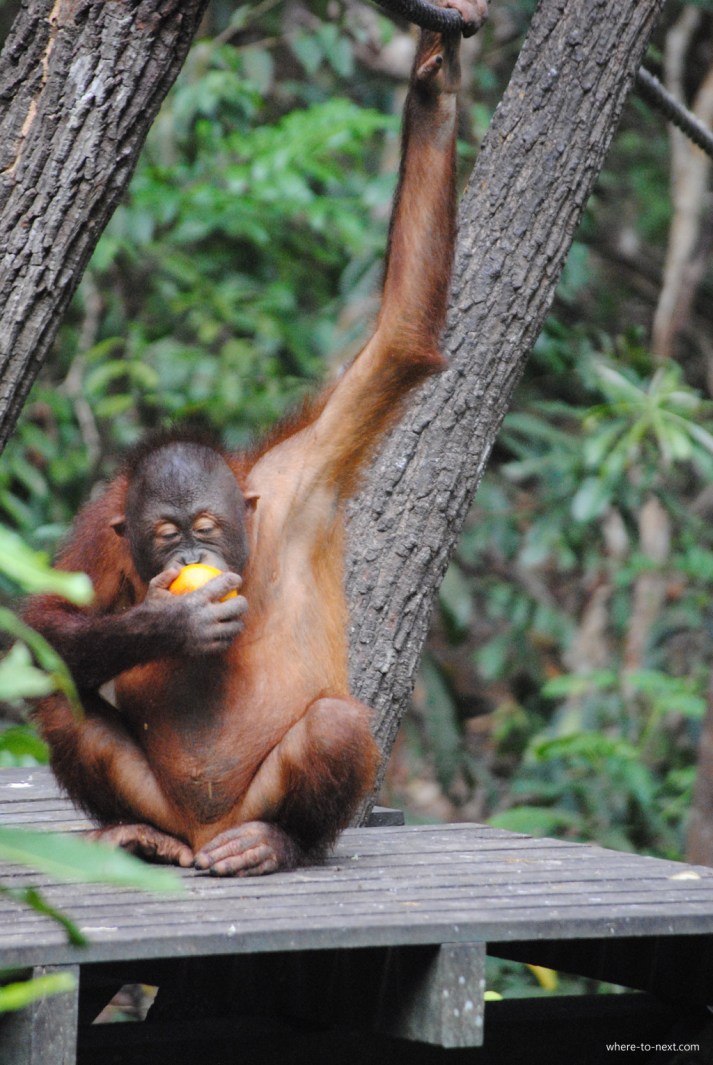 It’s not until they have found that bond with another orphan that they are moved to the sanctuary at Rasa Ria. We learn all of this at one the highly informative guided walks through the sanctuary as we watch the keepers feed them and play with them. 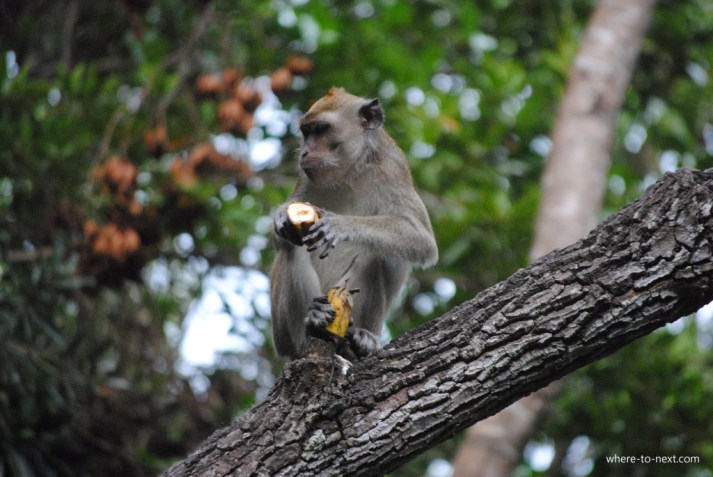 The sanctuary is 64 acres, larger than the resort itself and as well as the (current) two orangutan residents, it’s full of cheeky macaques, small Asiatic deer, monitor lizards, the odd venomous viper and all sorts of birdlife. If you’re lucky you might also spot a slow loris or a binturong. Our days here follow a pattern of busy activity followed by slow, lazy afternoons with perhaps a bit of indulgence and relaxation. 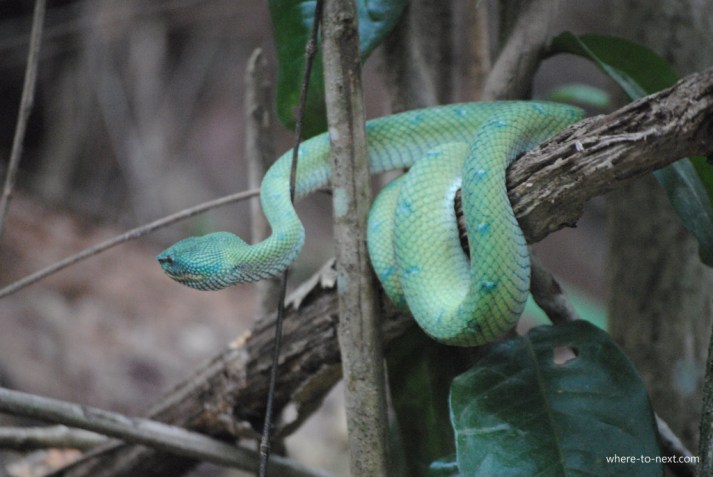 Another early start sees us heading for Kinabalu National Park and a visit to the Australian War Memorial in Kundasang near Ranau – the final destination for 2300 Allied troops who were marched to their deaths by the Japanese at the end of the Second World War. 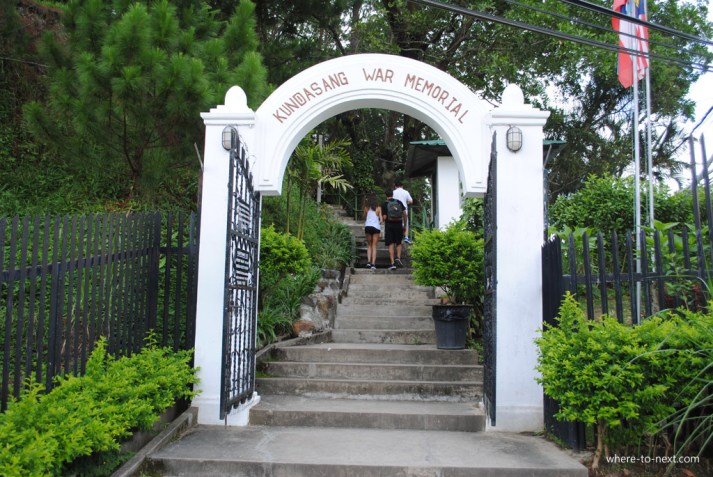 It was the worst wartime atrocity suffered by Australian troops and yet it goes largely forgotten, even this little war memorial was left to crumble almost to ruin, until a group of volunteers undertook to restore it. It now has gardens for each country represented on the march which are tended to with care (but not a lot of money). The highest peak of Mt Kinabalu can be seen from here, shrouded by clouds, which are said to protect the spirits of the dead. We’re heading there next for a hike through the rainforest in the foothills.

Our walk takes us through thick forest, past enormous oak and walnut trees, tall thickets of bamboo, countless orchids and (apparently) over 600 species of fern. 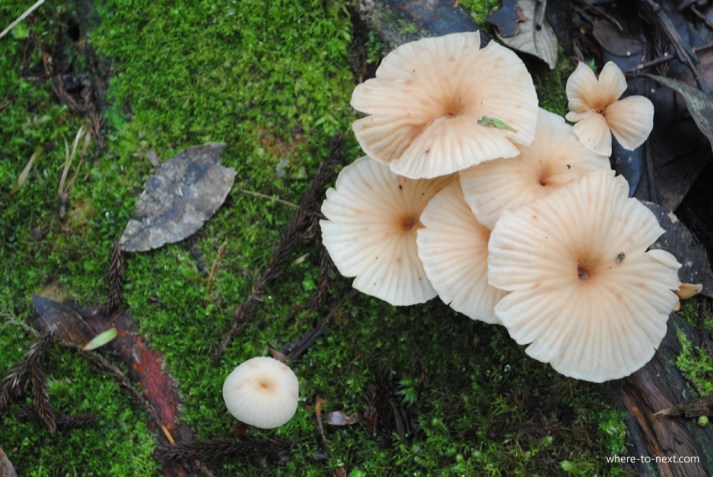 It’s a haven for bird watchers, and we come across quite a few along the way on the boardwalk, huddled together in camouflage jackets with enormous camera lenses perched at the ready on tripods. When we return to our rooms that evening there’s another treat in store for us. The enormous double spa bath on our balcony is filled with bubbles and rose petals and there’s a bottle of champagne chilling next to it. Bliss. 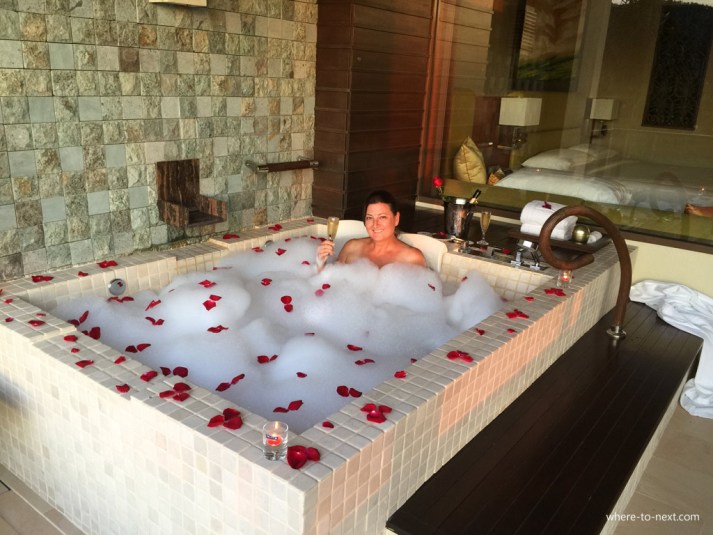 We brave the Sunday Market the next morning in downtown Kota Kinabalu, a long stretch of stalls selling everything from cold drinks and t-shirts to puppies and meal worms… 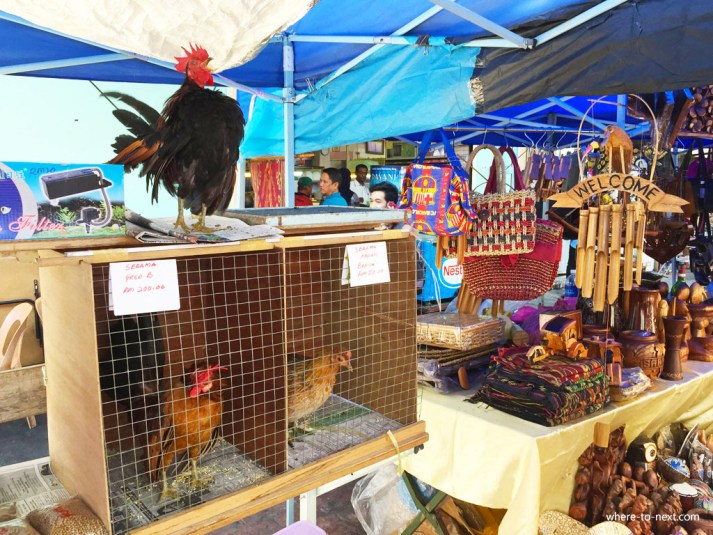 …before heading back to the resort for a delightful 90-minute massage at the Dalit Bay Country Club and Spa. 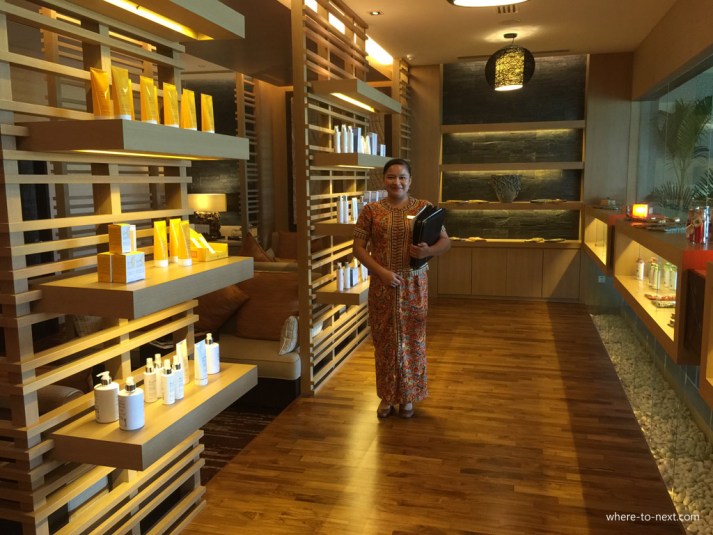 The following day we’re up bright and early again for a cycle to the nearby village. 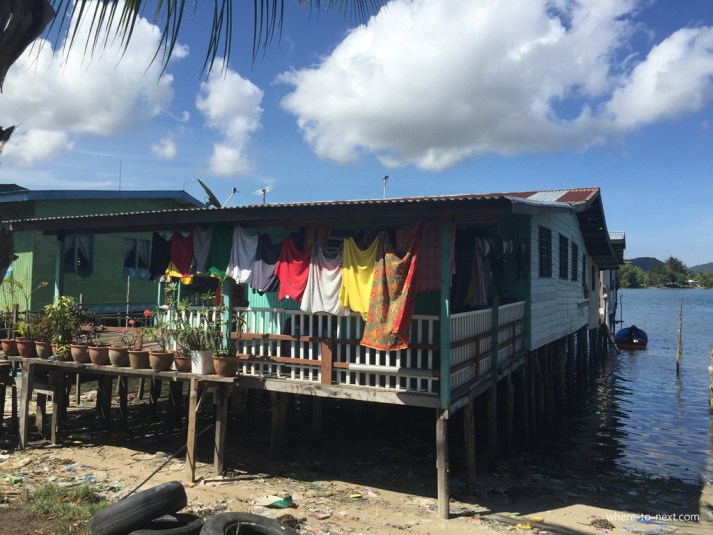 Here we met a few gorgeous local school kids, busy making Mother’s Day cards at the village school – we were a bit of a novelty; “orang putih!” (white people) and I think, at least for the boys, a happy distraction from colouring in, who much preferred playing tag with us. We also got to try a few local sweets before cycling back to resort for lunch and an afternoon of activities on the beach, as we try our hand at archery, rock-climbing, horse-riding, parasailing and jet skiing. Which brings us to our last day and a moment of reflection shortly after dawn, as we gaze at Mt Kinabalu in the distance, champagne in hand and another fantastic spread of food in front of us. Yes – this truly is luxury and a unique experience. Seeking a wild and secluded beach adventure this Summer? Look no further! Resolute Beach lies hidden right in front of Sydney’s eyes and is one of the most spectacular destinations within it’s national parks.

When will she learn?! Good question. You could say that this story is a little bit late… and you would be right. Happy 2020!